Sharing the Love of Jesus in Brazil

Previous Next
Sharing the Love of Jesus in Brazil

So how does Harvesters Ministries plant churches in these gigantic cities?  Urbanization is a scary fact as young people flock to the cities from rural areas.

Although the strategy stays the same – church planting through evangelism and discipleship – the model is finely tweaked to provide maximum growth in some churches who are dying. One of these critical areas is Goânia where we have spent a week training, helping and expanding. 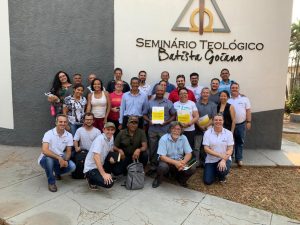 Reaching out to those in Need

Current training saw us expanding to forgotten villages three hours out of Goiânia to a place called Jossura.  The heat was unbearable and I couldn’t help but constantly peak at our super eco-friendly Chevy’s temperature gauge. It got stuck at 44°C. And according to all – this was winter season! 60 Pastors showed up for our training. Their churches were all dying.

As one pastor explained, “I have been dreaming of this day my whole adult and ministry life! Our churches got stuck at 70 members for the last two decades. Help!”  Their sincerity and tears broke my heart. Harvesters is going train pastors in Jossura and help them to grow their congregations with evangelism and discipleship.

Back to Goiânia – a City of Great Need …

As I write this I just survived a 145km/h Uber ride to the airport in Brazil at 03:30 in the morning.  I wondered about the meaning of life – as I often do at high speeds.  We have been in several dying churches – sad to see but through Harvesters it was great to resuscitate those dying churches through discipleship.

At the seminary where we were invited to train pastors they watched us with teary eyes as they sat and realized they were still only trained to preach to an audience.

There has been significant growth and success stories in many of the areas where we work in Brazil. Brazil currently sends out more missionaries than any other country in the world. To keep on doing this Brazil needs more churches full of disciples. Please pray for Brazil and the Amazon with their 10 000 lost villages.  We will soon plant a church in every single one of them!