A Tribute to a True Disciple

Previous Next
A Tribute to a True Disciple We as a Harvesters Ministries family recently received very sad news. Pastor Saeed from Egypt passed away at the age of 80. He was a true disciple! He truly glorified God with every aspect of his life.

He was a Christian warrior and his testimony led many to Christ. He was a champion of the Christian faith in Egypt and was widely respected for his church planting endeavours. God has graciously used this man of faith to plant 50 churches and to raise the finances to build facilities for each one of them.

One of the many stories that Pastor Saeed shared with us was the amazing testimony of the special prayer meetings that was held every single Friday.

On a visit to South Korea some decades ago, the Lord birthed in Pastor Saeed’s heart a vision to see a Christian Conference Centre established in Egypt, patterned on the “prayer mountain” retreat centres that he had observed in South Korea. This resulted in the acquisition of a 34-hectare piece of land on the Desert Road between Cairo and Alexander, where the air is fresh and the atmosphere is un-rushed, where groups of God’s people could gather for times of spiritual refreshing from the Lord. “Prayer Mountain”, surrounded by a perimeter wall measuring 3 km, consists of a working farm as well as a well-equipped retreat centre that will accommodate 300 people upon completion.

Pastor Saeed hosted prayer meetings on Friday mornings. His congregation would start praying at 3:00 in the mornings to avoid the authorities and the meetings would last for up to three hours. Can you imagine being so dedicated to your relationship with Christ that you would attend a prayer meeting at 3:00 in the morning? This is truly inspirational! What is even more impressive is the fact that these meetings were attended by at least 100 people at a time.

When Harvesters Ministries first reached out to Pastor Saeed about planting churches and introducing the Harvesters Ministries model in Egypt, he expressed his reservation to us about the workability of the model as the Egyptian government requires a church to have a building in order to be recognised as a church.

We praise God that He worked powerfully in the heart of our brother, because when the opportunity was given to pastors to respond to the challenge to plant churches in partnership with Harvesters Ministries, Pastor Saeed was the first to leave his seat and expressed his commitment to God. 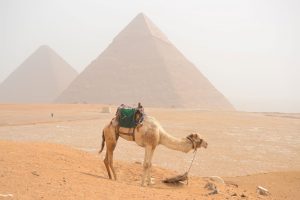 The last words that he spoke to me on that Saturday afternoon was, “God is giving me the opportunity to start again.”

If we as believers do nothing, more than 88 million Egyptians will be lost for eternity and will never have the opportunity meet their Redeemer. This is something that Pastor Saeed understood. He was on fire for Jesus and a true disciple in one of the most hostile countries in the world.

Today we salute and honour Pastor Saeed. May he rest in peace and may his ministry and legacy continue to grow in Egypt.

We are honoured that we knew such an inspirational man. Please continue to pray for Pastor Saeed’s loved ones during this difficult time.